California – A Mecca of Craft Soda

10 Brands!  Yes, Californians produce 10 great brands of craft soda!  California is a big state, but that’s a lot of craft soda brands.  Each brand represents the unique vision of its founders or its location in California. This is the kind of soda you remember drinking as a kid: the nostalgic stuff like old-fashioned root beers, sarsaparillas, ginger beers, and cream sodas.  It usually comes in a 12 oz glass bottle and is generally sweetened with cane sugar, not high fructose corn syrup.  Also known as artisanal soda, it is made in small batches with recipes designed by the “mom and pop” operations that created them out of their kitchen.  This article introduces the 10 brands of craft soda brewed right here in California.  It shares a little bit of the unique history of each brand, its city or town of origin, and the flavors available.  Because everyone’s palate and tastes are so different it’s really impossible to rank them in order so we will just go down the list alphabetically: 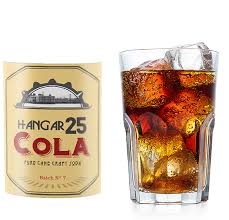 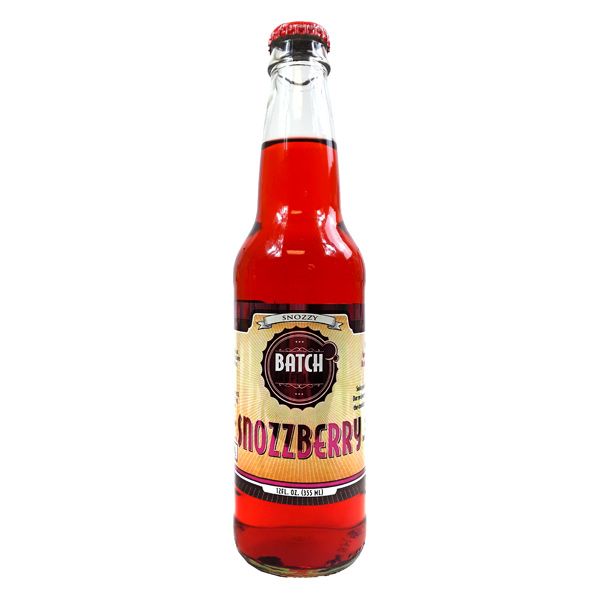 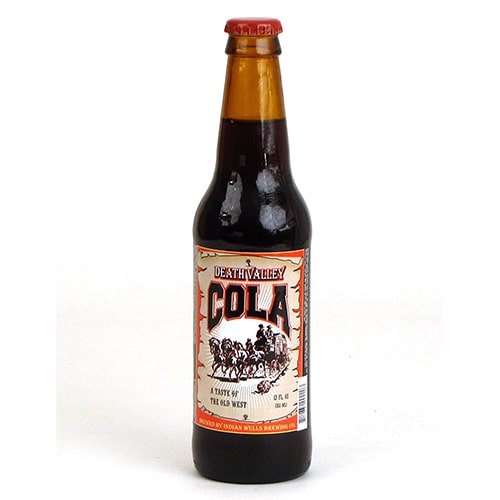 As one review on their website says, “this is a microbrewery in the middle of nowhere.” It is located in Inyokern, CA.  If you try to find it on a map, you will know immediately that the reviewers description is perfectly accurate.  Inyokern is about 1/3 of the way from Bakersfield, CA to Las Vegas, NV, hidden on the eastern side of the Sierras on Highway 395.  Indian Wells Brewing Company brews its craft beer and its craft soda from pure artesian spring water that trickles down through the earth from the snows of Mount Whitney and then bubbles up in the historic Indian Wells Spring.  Though the Indian Wells Lodge Restaurant has been around since 1960, Indian Wells Brewing Co. was born in 1997.  In addition to craft beer, Indian Wells brews up 6 delicious flavors of their Death Valley Brand craft soda: Black Cherry, Cola, Cream Soda, Orange Cream, Root Beer, and Sour Green Apple.  They use pure cane sugar and natural ingredients such as black cherries, West African organic cola nuts, Tahiti vanilla beans, fresh sarsaparilla, birch root, raw ginger, and of course, their pure artesian spring water to provide a soda that gives you “a taste of the old west.” 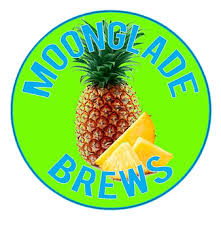 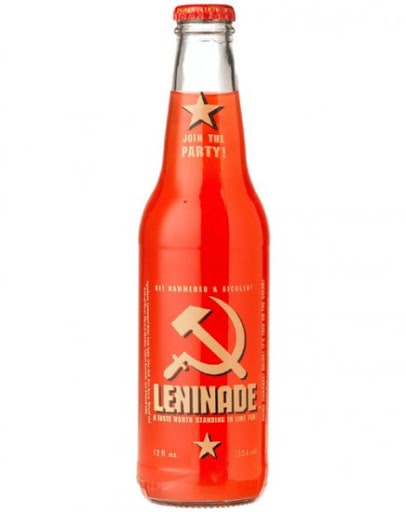 Located in Gardena, CA, Real Soda is actually a soda distributor – perhaps the largest soda distributor in the world – but the founder and proprietor, Danny Ginsburg, the “Soda Sommelier”, has invented several of his own craft sodas over the years.  He has Gardena Grape, Looks Like Orange Tastes Like Grape, and Redondo Peach.  He also offers Pedro Punch.  There are several stories about how Pedro Punch got its name.  It could have been named after the local port city of San Pedro, or it could be that Pedro, one of Real Soda’s employees, didn’t have a retirement plan set up so Danny created a soda named Pedro Punch and vowed to donate $1.00 from the sale of each case of the soda to Pedro’s retirement fund.  The mystery may never be solved.  My favorite soda invented by Danny Ginsburg is the very timely Make America Grape Again.  With all the political chaos and division these days, wouldn’t it be nice just to make America grape again!  Danny’s most famous and most popular craft soda creation is Leninade.  The label on the bottle encourages you to “get hammered & sickled” as you drink this soviet-inspired revolutionary red lemonade.  This is definitely a craft soda with a “taste worth standing in line for!”

As their website says, River City Soda “brings you back.”  This is soda pop the way it used to be made.  Janet and Bob Lake started and had run Blue Dog Beverage, a craft soda beverage distribution company in Northern California, for about 10  years before deciding to create their own root beer.  They had tasted the over 60 root beers that they distributed and still felt that their was room for improvement.  After 2 years of experimentation they finally came up with what they felt was the flavor that would make the best root beer float you ever had and “bring you back” to times gone by.  You’ll have to judge for yourself but I think you’ll agree that River City is an amazing root beer.  After developing the perfect root beer, the Lakes turned to developing other flavors of old time craft soda.  They make 50/50 Orange Cream which tastes like a Creamsicle in a bottle, River City Blueberry Lemonade Soda which is reminiscent of Sweet Tart candy, and River City Ginger Beer which is lightly sweet with some heat at the finish.  It Makes a great Moscow Mule or a River City Whisky & Ginger.  River City Brand sodas can be found at many grocery stores up and down the west coast such as Save Mart, Raleys, Nugget, Safeway, and Fred Meyer.

Sparky’s Fresh Draft Root Beer is made by Knox Brewing, located in Pacific Grove, California.  It’s a result of years of home brewing and experimentation – 10 years in fact.  The formula was finalized in 1999, and the root beer was named after Sparky the cat who hung around watching Kevin Knox perfect his creation.  One thing that makes Sparky’s Fresh Draft Root Beer unique, and probably the reason why it took Mr. Knox over 100 test batches to perfect the formula and bring it all together, is the fact that it has over 12 ingredients.  These include birch, local California honey, pure cane sugar, and based on the taste, may also contain vanilla, wintergreen, spearmint, cloves, anise, and more.  Another thing that makes Sparky’s Fresh Draft Root Beer unique is that it is kettle-brewed just as many craft beers are.  In addition, root beer is the only flavor of craft soda that Knox Brewing creates.  Obviously, this gives them some real expertise in the root beer world as they have put all their energy and creativity into this one product.  Sparky’s comes in the 12 oz glass bottles typical to craft soda, and also in 22 oz glass “bombers” just like craft beer.  The thing I love most about Sparky’s Fresh Draft Root Beer is the saying on the box: “Leading the Root Beer Revival!”  I didn’t even know there was a root beer revival, but if there is, I’m glad to be a part of it!

Sunshine Bottle Works which launched in 2008 is located on the Central coast of California.  They offer 4 all-natural craft soda flavors.  All are sweetened with 100% cane sugar though the company uses 20% less sugar in its sodas than is used in most mass-produced sodas. Sunshine Bottle Works All-Natural Root Beer contains the flavors of sarsaparilla, vanilla, clove and anise.  Sunshine Cream Soda is heavy on the vanilla, and proud of it.  In fact, the description on their website says, “enjoy the bold vanilla bomb.” Sunshine also makes a ginger beer which they describe as “hazy and spicy.”  Lastly, Sunshine Bottle Works makes a unique soda called Spezi.  It’s a special mix of cola and orange.  Sounds delicious! 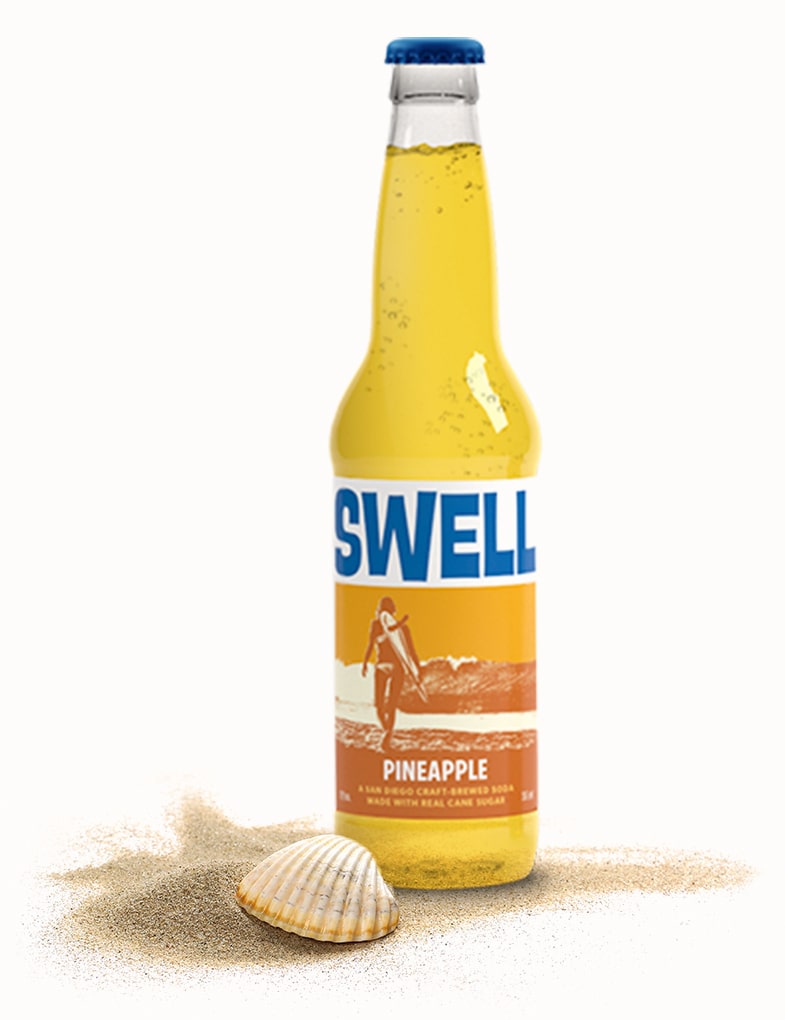 Launched in 2017, Swell Soda Company rides its craft soda wave right out of San Diego, California offering 9 unique flavors of Southern California beach-inspired flavors including Tangerine, Pineapple, COLAfornia, Pomegranate, Wild Blueberry, Coffee Vanilla Cream, Lime-N-Lemon, Big Ginger Ale, and Diet COLAfornia.  Of course the bottles have cool beach life images on them like surfers, waves, and sunsets.  All flavors of Swell craft soda are made with real cane sugar.  The founders created the soda to bring them and their community back to their childhoods of watching cheap surf flicks in Pacific Beach, playing around in the ocean in Children’s Pool in La Jolla, and drinking sodas and eating dipped frostie cones on the beach.  The company believes in family, community, diversity, and in celebrating life.  As they say on their website, life is beautiful, life is swell, and soda makes people happy.  So accept their invitation and ride the barrel with them.  The craft soda barrel that is!

Above are the 9 most visible craft soda brands in California, but I know there are other hidden gems that are just getting a start, or are still working on their website, or are very local to their areas.  In fact, just as I was finishing this article I found my 10th California craft soda brand: Burly Beverages in Sacramento, CA, and I’m sure there are more. California really is a Mecca of Craft Soda so plan your pilgrimage to the land of beaches, movie stars, and the sweet, delicious craft soda!

Leave a Reply Cancel Reply
Categories
Login to Blue Dog Beverage
Reset Password
Enter the username or e-mail you used in your profile. A password reset link will be sent to you by email.